Starting line-up: Lauren Rayner, Katherine, Meg Broughton, Jo Madden, Jo Cable, Claire Wells, Helene Buckingham.
Sunday 15th Nov saw the Thoroughbreds Er2 squad step out on court keen to put their unlucky defeat at Rookies well & truly behind them and end the winning streak of Omega.
The first quarter started pretty much goal for goal. But with lots of mid-court pressure, well taken rebounds in the defensive circle & accurate shooting from the duo of Claire &amp; Helene Thoroughbreds took the lead 11-9.
The team stayed the same for the 2nd quarter. And once again started off pretty much goal for goal. Both teams turning over the ball & converting. Jo Madden at centre continually put the Omega attack under pressure around the circle edge. And the match at half-time finished 24-22
The 3rd quarter saw lots changes, some fresh legs to try & pull away from Omega for the win. Gilly on as GD, Jo Madden moved to WD, Meg to C, Lilly Skeeles to WA, Helene to GA &Vicky Hagon on at GS. Fresh legs however were not enough to stop Omega’s fast mid-court ball play & rotational shooters from swinging the ball. Lilly had to call time half way through which saw Claire return to court as WA. But Omega were on a roll & turned over a lot of Thoroughbreds centres & converted them to finish the quarter 35-38 to Omega.
The last quarter saw no change. A motivational team talk meant Thoroughbreds walked out on court keen to turn the match back in their favour & take the win. With some sensational feeds into the circle from Claire & Meg shooters Helene & Vicky kept putting the ball away nicely which rose the whole teams spirits. Lots of support from the bench & supporters helped circle defence make some key turn-overs. And constant pressure mid-court from Meg & Jo saw Omega fall onto their back foot. A massive team effort the whole way down court saw Thoroughbreds take the win 53-48 & go to the top of the ER2 table.
Player of the match Jo Madden.
Players player Vicky Hagon. 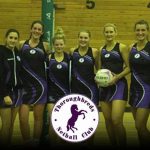 Thoroughbreds Vs the Bears!ER2 Matches